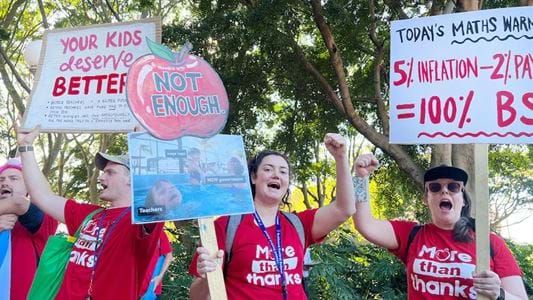 NSW private and public sector union members are rallying outside state parliament protesting wages policy which they believe will leave workers in a worse position when inflation hits.

Stay up-to-date on the latest news with The New South Wales Briefing – keeping you in the loop with news as it hits:

Premier Dominic Perrottet had already stated on June 6 that public sector workers will be given a three per cent pay rise in this year’s budget, and could expect another 0.5 increase next year.

"We are losing skilled teachers, nurses, cleaners and we're going to have more pressure in NSW for services to be provided that we can't retain."

"It's not much to ask and the government needs to act."

Join Tom Tilley with regular rotating co-hosts Jan Fran, Annika Smethurst and Jamila Rizvi on The Briefing, Monday - Saturday, for the day's headlines and breaking news as well as hot topics and interviews. Available on Listnr.