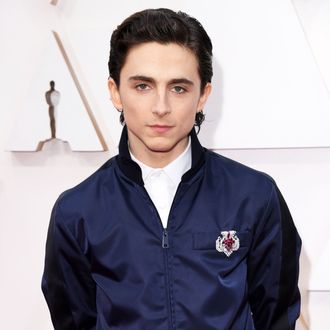 Ah, the all-encompassing single vision of young love, when it’s only you, your lover, and the angels singing above. Everything seems rose-colored, even your pasty movie-set skin. Timothée Chalamet had a crude awakening to the realities of his 2019 romance with Lily-Rose Depp when those PG-13 paparazzi photos of them making out on a boat in Capri, Italy, went viral for all the wrong reasons last September. Namely, Chalamet’s ghostly presence haunting the ship. The actor relived his mortification in a new GQ cover story, sidestepping details about his offscreen relationship with his onscreen queen in The King. “I went to bed that night thinking that was one of the best days of my life,” Chalamet said. “I was on this boat all day with someone I really loved, and closing my eyes, I was like, indisputably, ‘That was great.’ And then waking up to all these pictures, and feeling embarrassed, and looking like a real nob? All pale? And then people are like: This is a P.R. stunt. A P.R. stunt?! Do you think I’d want to look like that in front of all of you?!”

Who is going to tell him that that’s what he looks like? The post–Venice Film Festival make-out came just months before The King, also starring Robert Pattinson, was set to come out on Netflix, so you can’t really blame the internet for being cynical about love. The expectation of privacy for heartthrobs has changed since the days of his predecessor Leonardo DiCaprio, but even the legend himself isn’t immune to an embarrassing paparazzi pic.