DAZN News US
Share on FacebookShare Share on TwitterTweet
The final UFC pay-per-view of 2020 features the shortest turnaround in UFC history for a world title fight, as Deiveson Figueiredo defends his flyweight belt against Brandon Moreno. 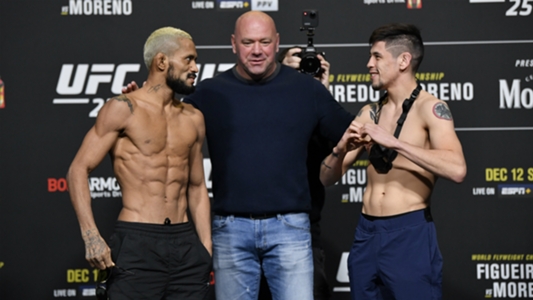 The final UFC pay-per-view of 2020 features the shortest turnaround in UFC history for a world title fight, as Deiveson Figueiredo defends his flyweight belt against Brandon Moreno.

History will be made at the UFC's final pay-per-view of 2020, with UFC 256 taking place from the UFC Apex in Las Vegas, where flyweight champion Deiveson Figueiredo faces No. 1-ranked contender Brandon Moreno on Saturday night.

Once Figueiredo steps inside the Octagon at UFC 256, it will mark the shortest span between title defenses at 21 days, breaking the previous record set by Ronda Rousey and Matt Hughes at 56 days.

Initially, UFC 256 was set to be headlined by dual champion Amanda Nunes facing Megan Anderson for the women's featherweight title. But Nunes had to bow out for circumstances that are still unknown. The UFC proceeded to book bantamweight champion Petr Yan with Aljamain Sterling. However, Yan had visa issues and wasn't able to enter the United States.

After Figueiredo submitted Alex Perez in the first round at UFC 255 on Nov. 21 and took minimal damage in the fight, along with Moreno dispatching Brandon Royval in the first round on the featured prelim of the same event, the UFC was able to book the championship fight.

Figueiredo defeated Joseph Benavidez in February but was unable to claim the vacant 125-pound because he missed weight. They fought again in July, and Figueiredo had issues on the scale again, but won the belt by plowing through Benavidez via first-round submission to win his first world title. A victory at UFC 256 by the Brazilian would make him 4-0 in 2020 with his sixth consecutive win.

Follow DAZN News as we will have live coverage of the UFC 256 main card, beginning at 10 p.m. ET.