Kennedy clinches it: Eagles steal a cliffhanger over Tigers 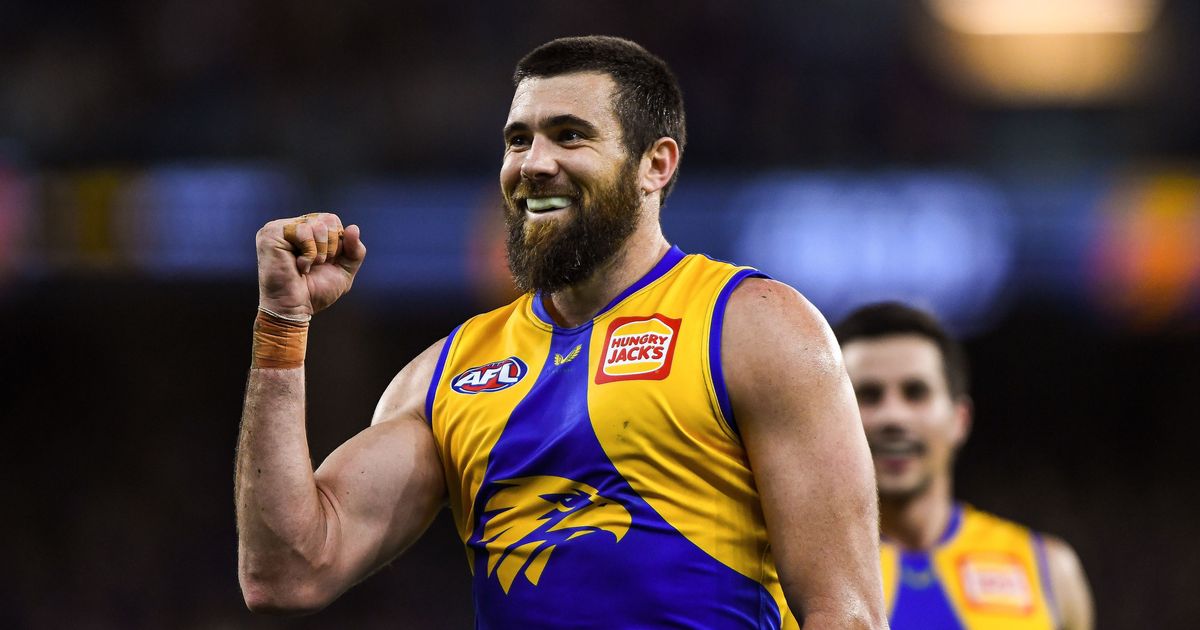 WEST Coast has the top four in its sights after a thrilling and famous four-point win against Richmond that went down to the death, with Josh Kennedy kicking the match-winning goal in the final minute.

The Tigers built a 22-point lead halfway through the final term but were mowed down by a desperate Eagles team that charged home with the last four goals of the match, winning 13.7 (85) to 12.9 (81).

Kennedy was the hero for West Coast, diving for the mark inside 50 and then snapping the match-winning goal from 35m on the boundary to cap an outstanding night for the champion forward.

The veteran finished with 4.0 and six inside 50s in a best-on-ground performance that kept the 8-5 Eagles in the top-four race as they go into their round 14 bye.

Young Richmond star Shai Bolton looked to have given the Tigers a big enough break to drive them to their second straight win in Perth, but the Eagles' efficiency in front of goal got them home.

Jake Waterman, Jamie Cripps, Oscar Allen and then Kennedy all converted set shots in the final 10 minutes to secure one of the club's great home-and-away wins, given what was at stake.

Former captain Shannon Hurn was a hero at the other end of the ground, taking a desperate intercept mark on the last line after Richmond superstar Dustin Martin drove the ball inside 50 in the dying seconds.

Midfielder Elliot Yeo was herculean in the final term, driving the Eagles' midfield advantage with 10 disposals, seven clearances and eight inside 50 for the quarter.

The Sunday night showdown between two contenders delivered, with both teams putting their available weapons on full display knowing the loser would likely be out of the top-four race.

West Coast superstar Nic Naitanui rose to the occasion to control the stoppages with  31 hit-outs and five clearances, lifting in the run home, while tough midfielder Jack Redden (32 disposals and seven clearances) was superb in the clinches.

Young Eagles Luke Foley (22 and five rebound 50s) and Luke Edwards (27 and four inside 50s) also delivered on the big stage, covering for the absence of several key players.

Kane Lambert returned in great touch for the Tigers and finished with 27 disposals and two goals, converting on the run in the final quarter to give his team a 17-point lead.

Martin (23 and six clearances) inserted himself at critical times and looked to have the Tigers rolling to victory when he dribbled home one of his two goals from the boundary early in the fourth term.

Nick Vlastuin was a thorn in the Eagles' side all night and held Jack Darling goalless and to just seven disposals, while Nathan Broad had the better of Liam Ryan.

It was not enough for the back-to-back premiers, however, who fell victim to a West Coast team desperate to re-establish its Optus Stadium fortress.

Bolton's nearly nightBack in his home state, Richmond star Shai Bolton was involved in everything early but lacked the finish needed to damage the Eagles. He had an opportunity to set up Jake Aarts for an easy goal over the top but went himself and missed, before badly spraying two more shots on goal. It was hard to take your eyes off the young star, who flew for what would have challenged his round eight mark against Geelong as Mark of the Year if he'd been able to reel it in. Bolton bounced back to have some key involvements in the second half and he kicked a brilliant running goal from 50m, finishing with 23 disposals and a team-high eight inside 50s.

Tigers' missed opportunityWest Coast coach Adam Simpson conceded the Tigers had played better for the majority of the match, but the Eagles were able to lift and take their chances when it mattered. The visitors led for more than 90 minutes of the match and twice built leads that asked the question of West Coast. A win would have been massive for the back-to-back premiers, who could query whether Liam Ryan's critical pass inside 50 to Kennedy went the required 15m. A lack of composure in big moments was the difference.

Nic's brilliant goalLeading the Eagles for the second time in the absence of skipper Luke Shuey and deputy Jeremy McGovern, superstar ruckman Nic Naitanui took to his new role like a natural. He delivered his usual stoppage advantage, but the produced one of the highlights of the match when he snapped a brilliant goal running towards the boundary. Naitanui, who first led the Eagles last week against Carlton, also took a superb contested mark in the final quarter surge, but he missed the resulting set shot.

Tickets for the Big Freeze in Sydney match are on sale now. Get your tickets HERE. The famous blue Big Freeze beanies are still available from Coles, Coles Express, Bunnings or fightmnd.org.au, while donations can be made at fightmnd.org.au.